The two largest islands in the National Park.

Three islands form the Cies archipelago. The beach of Rhodes, which naturally links that of the lighthouse and that of the North, was declared the most beautiful in the world in 2007 by the British newspaper The Guardian.

The route to the lighthouse, located at the highest point of the archipelago, it is a must see.

The third island, that of the South or San Martiño, is only accessible by private boat anchoring on its heavenly beach. Possibly, together with Onzeta, they are the most virgins in the entire Park.

In this archipelago, some 25,000 pairs of yellow-legged gulls live together and form the largest colony in the world. Nothing has to be envied by its neighboring island of Ons, which shares with Cíes numerous species of seabirds.

Navigating between the two archipelagos it will be easy to enjoy, in its purest and wild state, the company of dolphins, gannets, cormorants or araos, these almost extinguished.

BOARDING FOR GROUPS: To choose date 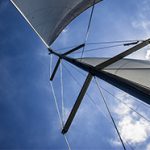 Food on board or on land. Free time to visit the island or enjoy its beaches.

Sleep on board, anchored on the beaches of Rodas or San Martiño.

Free time to visit the island, and enjoy its beaches and rich cuisine.

The price includes: Pattern-guide, fuel, moorings, anchorage with landing in zodiac, drinking water, VAT, and all services on board bathrooms, kitchen and cabins.

(Does not include meals).

You can take the food for the day on board, or eat at any of the bars in each port.

Attire: It is recommended to wear comfortable and sporty clothes as well as warm clothes and water jacket. The recommended footwear will be sporty so it doesn’t slip.

Heels are not allowed.